Home / News / The Other Guys: A cappella Like You’ve Never Heard Before

The Other Guys: A cappella Like You’ve Never Heard Before 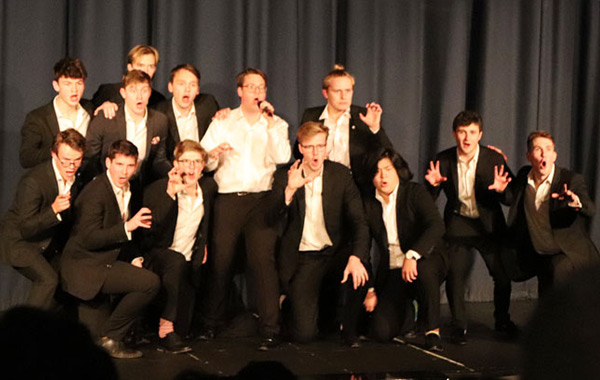 Jaw-dropping harmonies, inventive lyrics and slick dance moves: Thursday night was a cappella night at Downside School as singing sensation The Other Guys performed a medley of songs in the school’s theatre.

Scotland’s premier all-male a cappella ensemble, The Other Guys (TOG), was founded in 2004 by a group of friends at the University of St Andrews who shared a love of the genre. Group members have changed over the years but the energy, quality and originality of their offering remains untouchable. Their style is ingenious – mixing classical and contemporary numbers – some by other artists and some written by the group themselves.

Earlier in the day the group surprised Downside pupils and staff in the Harry Potter-style dining room when they flashmobbed during lunchtime, performing their take of Everybody by the Back Street Boys. The mob was the talk of the School that afternoon, and a great precursor to the evening ahead.

A further treat during the afternoon was seeing the group break into song during a tour of the magnificent Downside Abbey Church (see link on website news: https://www.downside.co.uk/the-other-guys-a-cappella-like-youve-never-heard-before)

It’s hard to say which number from the evening concert received the loudest applause. Every offering was a delight. The comedic values of some made us cry with laughter, others were slower, and more reflective with powerful lyrics and haunting melodies. Indeed, the repertoire varied from Royal Romance (based on Lady Gaga’s Bad Romance) – a cheeky tribute to the wedding of Princess Kate to Prince William (two of St Andrews most famous alumni) – to the wistful harmonies of The Long Day Closes by Henry Fothergill Chorley and Arthur Sullivan. TOG’s version of Abba’s Does Your Mother Know That You’re Out was beset with hilarious dance moves, and the beat boxing from Downside Old Gregorian Felix Hobbs (S18) in various up-tempo numbers was remarkable.

Raising money for charity has always been central to the group’s ethos, with several successful charity music videos under their belts. Last night was no exception with a retiring collection in aid of ‘Netball For All’ – an initiative in Malawi to support girls and young women through education, by providing them with the skills and confidence gained through sport.

A video of the concert will be released in due course.

To find out more about Downside the school’s next Open Mornings are on 7th March and 16th May 2020. You are also very welcome to make a private visit to Downside School on a day to suit you.