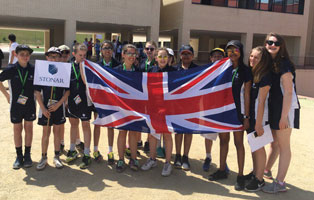 A team of Stonar School athletes aged from 11 to 14 travelled to Barcelona earlier this year to take part in the fifth NACE Olympics. An intense and competitive programme saw them pitted against pupils from many other schools in sports including football, basketball and swimming – and new sports such as paddle and handball. Stonar is the only boarding school in the UK that is part of the NACE group of 22 schools around the world. Stonar has sister schools in India, France and Spain. This gives Stonar students opportunities to forge links, undertake exchanges and make friends from around the world – as well as doing wonders for their languages! Stonar’s pupils acquitted themselves well, with several notable victories. An impressive result from the U12 girls saw them winning 18-0 in their first ever basketball match and going on to take bronze in the tournament. It was not just about sports, however. The boys and girls spent their free time and lived with a student from Agora International School in Barcelona and their family. As one parent commented: ‘My son got happier every night I talked to him! He’s made a good friend, loved his host family – they sent us lots of family photos with William in the middle – and he’s already been invited back this summer. That’s what it’s all about. That’s what a great school gives you.’