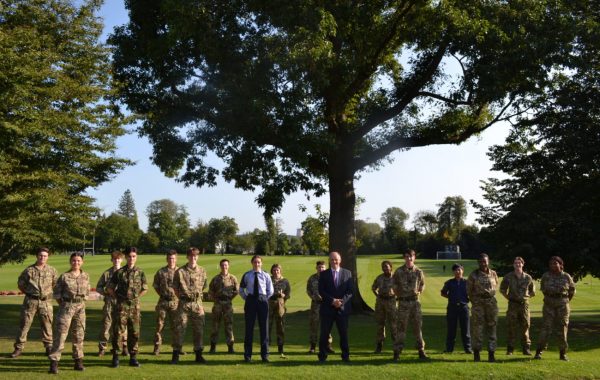 We are extremely proud of the Sixth Form Combined Cadet Force (CCF) cadets who have been promoted into positions of leadership.

A selection of Year 12 pupils have been made Junior Non-Commissioned Officers (NCOs) and will assist staff and their senior peers in the Contingent’s training programme, while the newly promoted Year 13s have been awarded the title of Senior NCOs in recognition of their commitment and experience.

We are delighted to welcome our new Head of Contingent, Alex Copson, Year 13. Alex describes the CCF as “an amazing place to develop life skills. It’s a key part of bringing up future generations to be leaders, team players and contributors to society. CCF for me has been the best opportunity I have taken as it has taught me things no other aspect of Trent life can.”

Alex will be assisted in his role by the new appointed Head of Army (Jackson, Year 13), Head of RAF (Amelia, Year 13) and the Cadet-Quartermaster (Luke, Year 13). To achieve these prestigious titles, pupils undertook interviews and assessments. It has been fantastic to see so many Year 13 pupils continuing their commitments into their final year and developing a variety of skills and character strengths.

Student leadership sits at the heart the CCF and we are confident that this group of pupils will inspire, motivate and guide the younger cadets exceptionally well over the coming year. Head of RAF, Flight Sergeant, Amelia Hibbs in Year 13 is looking forward to working with the newly promoted NCOs to create an exciting and nurturing environment for the new cadets. She said, “CCF has given me the opportunity to act as a role model, not only amongst my peers and the incoming Year 10s but also for the whole school.”

Trent College is known for its modern outlook and traditional foundations, with the CCF being one of them. The co-curricular initiative enables pupils in Year 10 and above to develop their self-reliance, resourcefulness and teamwork skills in a variety of new and challenging situations. Find out more about the vast range of co-curricular activities and societies that enable our SENIOR SCHOOL pupils and SIXTH FORMERS to go further in their passions as well as making a positive impact in the wider world.