The Read School pays tribute to the WWI fallen 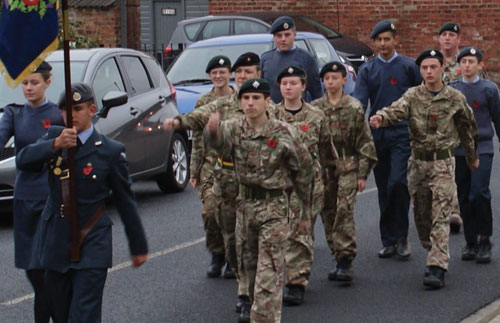 Read School’s Combined Cadet Force (CCF) is over 100 years old. In November 2018 the school paid tribute to fallen and serving past pupils as part of its World War One Armistice commemoration. CCF cadets marched to the local St Peter and St Paul Church in Drax, where the school has worshipped for over 350 years. Following a poignant remembrance service pupils laid a wreath at the memoral window in the church. The service was preceded by a spectacular parade of 45 horses wearing purple poppies to commemorate the millions of animals that never returned home from World War One. Among the riders were the Read School junior and senior equestrian team. Remembrance day was just one opportunity for Read School to commemorate its links with the Armed Forces. In recent years several pupils from the school have gone on to pursue careers in the Army or Air Force. The school is proud to welcome children from Service families to its small family boarding house.

Find out more about The Read School