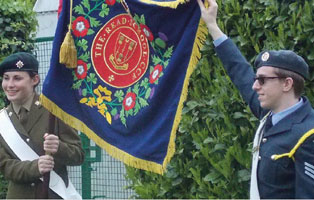 The Read School in North Yorkshire has one of the oldest Combined Cadet Forces (CCF) in the country with over 100 years of history. Former Read pupil Amy Broomhead was one of two CCF cadets in the country to win the prestigious CVQO Duke of Westminster Award. She says of her experience with CCF at Read and the opportunities it provided: ‘When I joined the Read School CCF little did I know of the opportunities and experiences I would have have in those five years. It has opened doors for me including being able to gain extra-curricular qualifications such as a BTEC and an Institute of Leadership and Management Level 3, alongside my GCSEs and A levels. These qualifications have helped me land job interviews and have always been a talking point with employers. The CCF also helped me grow as a person – to become more self-motivated, respectful and determined – and through the CCF I developed my teamwork skills. I have also been able to experience incredible things as a result of being part of the CCF – as well as having the opportunity to regularly travel around the UK on camps and expeditions, after winning the CVQO Duke of Westminster Award I went on the trip of a lifetime to South Africa, something that would never have been possible without the CCF. Despite not pursuing a military career, the skills, opportunities, experiences and qualifications I have gained by being part of the CCF have been very transferable and I believe have helped me to secure my position today.’