Parades of honour for Duke of York’s Royal Military School 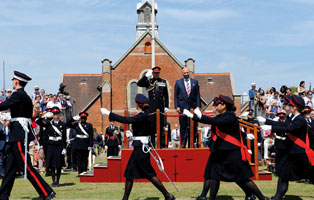 Duke of York’s Royal Military School pupils paraded in full ceremonial uniform and were inspected by guest of honour Reviewing Officer, Lieutenant General James Bashall CBE at the annual Grand Day in July. Founded in 1803, the Dover school is the only one in England and Wales to enjoy the Royal privilege of holding colours (granted in 1824 by King George IV) and marching the colours through the ranks. This only happens in infantry regiments. About 3,000 parents and guests attended Grand Day which commemorates the school’s heritage and traditions. The parade was led by the school’s impressive military band. Many of the pupils have family in the Armed Forces and, as a personal touch, wear the cap badge of their parents’ or family member’s Service, Corps or Regiment over their hearts. Before Grand Day, 30 pupils played a central part at a special service honouring the roles of Sir Winston Churchill and General Charles de Gaulle in World War 2. They provided a guard of honour and corps of drums for the unveiling of two statues in Park Richelieu in June following a request to attend by British Embassy officials in Paris. The Rt Hon Sir Nicholas Soames MP PC, Sir Winston’s grandson, inspected the school’s guard of honour. He also spoke with great warmth about the school, having visited in 2009 to act as Inspecting Officer for the drill competition parade, and present the Baroness Thatcher Sword of Honour. In June, DOYRMS pupils welcomed a group of pupils from King’s School in Gütersloh, Germany, to share a packed few days of sports, music and activities. King’s School is a secondary school in North Rhine-Westphalia, which serves the children of British military families stationed in the area. Alex Foreman, principal of DOYRMS, was head at King’s until December 2016 and the visit was part of a collaboration with British Forces Germany to provide a natural progression for pupils when King’s School closes in 2019.