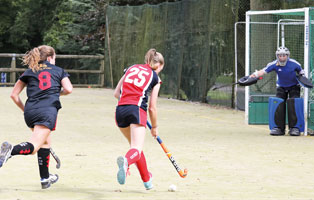 Girls’ hockey at Pangbourne College has gone from strength to strength throughout the 2017 season, with the U16 team earning themselves a spot at the Regional Championships. The U16 team fought off competition from local rivals, Bradfield College, and then produced a dominant display against The Abbey. Head of Hockey, Mr Dan Paynter, commented on the match against The Abbey, saying: ‘It was the semi-final and a big pressure game for the girls. They had the right mindset – there has been a change in hockey at Pangbourne over the last four years and the quality has improved greatly.’ Equally impressive was the performance of the U14s, who beat Bradfield College and Claires Court School in the County stages and reached the South Regional quarter final stage, the furthest they have ever progressed in the competition. Mr Terry Walden, Coach of the U14 Girls’ Squad, said: ‘I am incredibly proud that such a small group of girls can compete at County and get through to Regionals against much larger schools with bigger squads and a wider choice of players.’ Eventually they were beaten by an excellent Wellington side but their performances this season were outstanding. Further success was enjoyed by the U18s, who recently qualified for the regional indoor Hockey Championships having made it through the Berkshire Championships in October. The continued development in Pangbourne’s Hockey and consistently excellent performances this year was aided by a recent senior training camp in Spain.