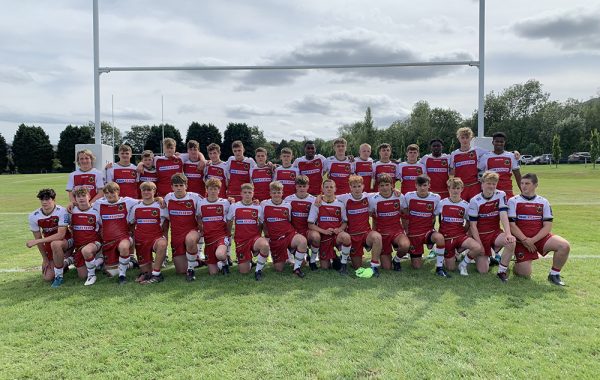 Talented young Rugby players from across the country were invited to compete and represent the Saints Academy at the festival, which took place at Malvern College in Worcestershire earlier this month (August).

Harry, 15, from Cambridge, played in the game which saw the Academy win 25-5 against Bath. He is one of several King’s Ely students to be selected for the Northampton Saints Developing Player Programme (DPP) in recent years. King’s Ely Senior students George Nearney, Bertie Whymark and Daniel Kember are also currently reaping the benefits of the scheme.

Director of Sport and Head of Rugby at King’s Ely, Jim Thompson, said: “I was delighted to hear about Harry’s selection for the Northampton Saints Academy over the summer. Harry has worked hard through the school Rugby performance programme to gain these representative honours and he fully deserved his call up. I will now look forward to supporting his development and progress throughout the coming Rugby term at King’s Ely.”

The DPP is a development programme that compliments school, club and county playing programmes, providing further development opportunities without the conflict of competition.

While a key objective by the end of the programme is to identify players with the greatest potential to enter the pathway towards the professional game and England, the scheme’s initial emphasis is on nurturing a player’s attainment of skills, game understanding (principles of play) and athleticism.

To find out more about opportunities at King’s Ely, please visit www.kingsely.org