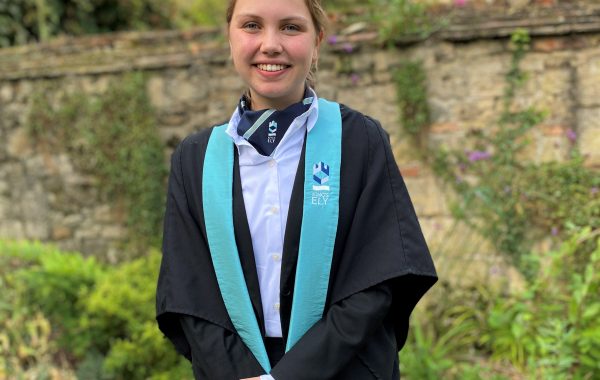 Eleanor, who is in Year 13 at King’s Ely Sixth Form, is no stranger to academic achievements, particularly when it comes to Maths and other STEM subjects. However, Eleanor has just secured her highest Mathematical accomplishment to date – a gold medal in the 2022 European Girls’ Mathematical Olympiad (EGMO), in which she was placed first out of 123 European contestants and sixth worldwide.

Eleanor, who is from the Bury St Edmunds area and who is Head Girl at King’s Ely, was one of only four girls chosen to represent the United Kingdom in this year’s EGMO. She travelled to Eger in Hungary during the Easter holidays to compete in the prestigious competition, in which the UK team was placed ninth amongst official European teams. Eleanor’s teammates all received bronze medals.

Eleanor, who joined King’s Ely Junior in Year 6, said: “Representing the UK at EGMO was an incredible experience and one that I will never forget. Ever since I read an article about a British girl starring at EGMO when I was in Year 9, getting a medal in the competition was something I aspired to, but never thought possible, so to win gold is an amazing feeling. I’m very grateful to everyone who has supported me – an enormous thank you must go to everyone at the United Kingdom Mathematics Trust!”

Eleanor has also recently travelled to Agros in Cyprus to represent the UK in the Balkan Mathematical Olympiad. She achieved a silver medal and was the highest performing female mathematician in the competition. Eleanor is also the only female selected for the squad in the International Mathematical Olympiad, the final team for which is revealed at the end of May.

Audrienne Bezzina, Head of Maths at King’s Ely Senior, said: “A gold medal in a competition as big as the EGMO is no mean feat, but to get the highest mark in Europe is just amazing. We are so proud of Eleanor – she is a talented mathematician, but she is also determined and so hardworking. She really deserves this success.”

Eleanor is studying Mathematics, Further Mathematics, Chemistry and Physics for her A Levels, and has recently been offered a conditional place to read Mathematics at Trinity College, Cambridge. Eleanor said: “The Maths Department at King’s Ely has always been extremely generous with their time. I feel very lucky to be so well supported.”