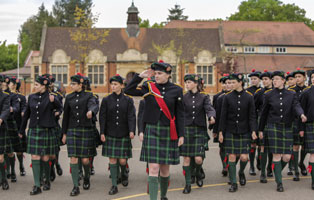 In May 2017, Gordon’s School held their annual Drill Competition and the Biennial CCF Inspection. Gordon’s School was established in 1885 as a memorial to Major-General Charles Gordon and consequently has a strong military influence, kept alive through marching on occasions such as this, which complements the programme of whole school parades. This year’s annual Inter-House Drill Competition was judged by Capt Campbell (Quartermaster Technical) and CSgt (DMaj) R Johnson, Support Company, 1st Battalion Welsh Guards, who said, ‘It was an honour to be involved in this fantastic event and we look forward to assisting in future years and to bolstering our links with the School through other training events.’ Parades such as these are not only a huge part of the School’s history but instil discipline, encourage teamwork and provide new opportunities to students. The Biennial CCF Inspection included a prize giving event where students were presented their Duke of Edinburgh Bronze Awards following a week in Dartmoor and the completion of the Ten Tors challenge. In December 2016, Gordon’s School was proud to see two CCF members, Daniel Farrow and Libby Butler, appointed as the first ‘Mayor’s Cadets’ by the Mayor of Surrey Heath. Daniel has also received an RAF Flying Scholarship while Pipe Major Magnus Fotheringham has gained a place on the officer training course at Sandhurst. Two new awards were presented to students at the Schools’ Annual Inspection in June. Thanks to a donation by the Patron’s Fund, the inaugural ‘Sword of Honour’ was presented to the best junior cadet while the best senior cadet received the inaugural Gardiner Award in memory of a former student and member of the 5th Regiment Artillery and 52 Brigade’s Reconnaissance Force, who was killed in action in 2008.