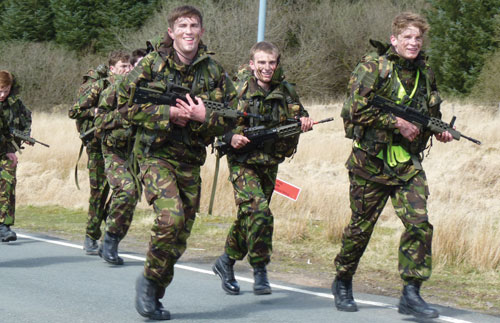 In 2018 Christ College Brecon took part in the 160st Infantry Brigade Cadet Skill at Arms Meeting and retained its Welsh Cadet Shooting champions title for the seventh year in a row. Christ College has a very active shooting programme for both small-bore and full-bore. With a shooting range available on campus, house shooting and house drill competitions are taken very seriously. The school has a strong historical link with the Armed Forces, dating back to 1894 when it received permission from the War Office to form the first school Cadet Corps in Wales. The school’s proximity to Sennybridge means that pupils regularly participate in Combined Cadet Forces (CCF) training days on the third largest military training area in the UK; while RAF cadets get the chance to fly with RAF service pilots at MOD St Athan. Although Christ College cadets have the opportunity to take part in international exchanges in more distant destinations, such as Eastern Europe and Canada, the school’s own boarding environment and location in the heart of the Brecon Beacons National Park is ideal for helping pupils develop their skills and take part in physical recreation and community service. This is reflected in Christ College’s very successful record with the Duke of Edinburgh’s Award Scheme, with a participation well above average and strong competition rates. To celebrate this success, last year nine young people from the school attended a presentation in the gardens of Buckingham Palace, where they received their Gold Duke of Edinburgh’s Awards. Former pupil Connor Norris, who joined Sandhurst’s officer commissioning course in January 2019, said: ‘Christ College gave me my first personal experience of the military, and certainly contributed to me wanting to have a career in the forces. The Cadet shooting matches, which I enjoyed thoroughly, were definitely one of my highlights.’