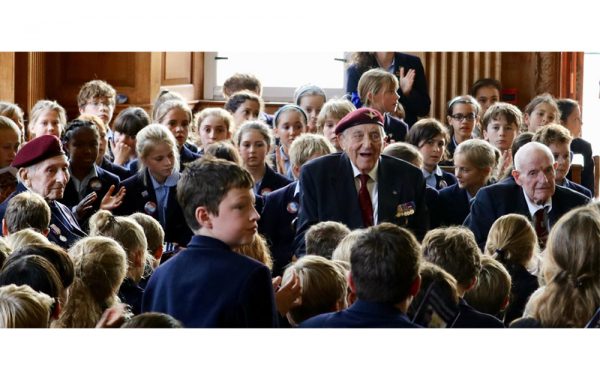 Walhampton Independent Preparatory School, near Lymington, hosted a special Service of Remembrance to mark the 75th anniversary of the Battle of Arnhem, Holland …

On Friday 4 October, Walhampton School hosted a special service to mark the 75th anniversary of the Battle of Arnhem, fought in Holland in September 1944. The service was held in Walhampton’s chapel and was attended by approximately 400 pupils and adults, including five Arnhem veterans (dressed in their berets and medals), who are all close to 100 years old: John Bosley (94), Jeffrey Noble (95), Arthur Bailey (95), Jim Hooper (97) and Victor Gregg (99). Many relatives also attended the service, including John Grayburn, son of Victoria Cross winner Jack Grayburn, who died of his wounds at Arnhem Bridge aged 26 years old.

Over the past decade, Walhampton has developed a unique relationship with the veterans and the stories of Arnhem. Headmaster Titus Mills has been taking parents and pupils to the battlefield every year for in-depth tours. They are the only UK school regularly attending the commemorative service in the cemetery, during which Walhampton children join hundreds of local Dutch children to lay flowers at the graves of fallen soldiers.

Titus Mills comments: ‘Walhampton wants to preserve the powerful stories of those brave men and women who endured the Battle of Arnhem. We want to be guardians of these stories of life and death, humanity and inhumanity, compassion and courage. I want our pupils to feel connected to this story. I want them to shake hands with the last few veterans and to experience history in a compelling way. They need to know the price of freedom. That is why, at our service, pupils presented the veterans with stones on which were painted the words “The young are grateful”.’ 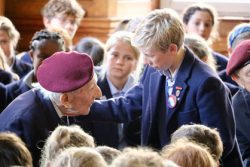 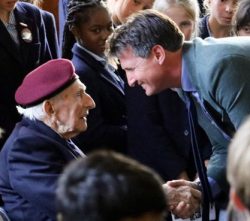 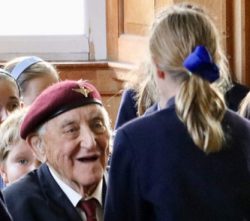 Main photo: left to right – Jim Hooper (97), Jeff Noble (95) and John Bosley (94)
with children from Walhampton School at its special Service of Remembrance