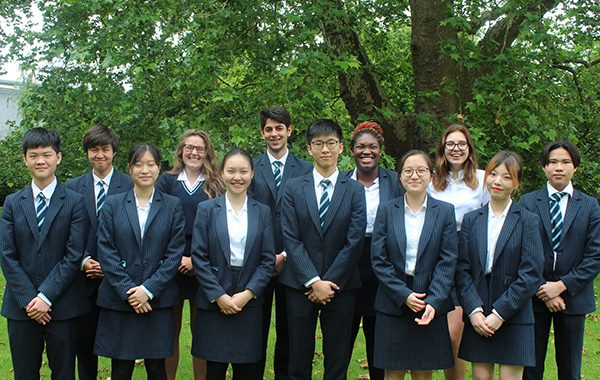 Families from across the globe travelled to King’s Ely to celebrate the achievements of their children and the school’s international programme.

The annual King’s Ely International (KEI) Prizegiving ceremony was held in the Old Palace to honour the impressive range of achievements made by Year 11 students on the one-year IGCSE programme, which has now been running at King’s Ely for more than 20 years.

The programme, which is for international pupils aged 15-16, facilitates rapid academic development providing students with access to King’s Ely’s A Level courses.

As well as recognising the academic progress and achievements of this year’s 37-strong cohort, the KEI team were also determined to acknowledge the breadth and depth of outcomes in all aspects of the students’ King’s Ely education. From a Chinese ice skater who had commuted to Peterborough every Saturday morning at 5am, to students who had successfully managed mental health issues, the ceremony acknowledged success in all its forms.

Holly Burke was recognised for her commitment to the King’s Ely Rowing programme, where both as a student and a coach, she had invested over 500 hours on the river since September 2018. She has targeted her ultimate ambition as national Rowing selection and she received the Contribution to Sport Prize.

Shimon Inaba, from Japan, was warmly applauded for making a three-grade improvement within five months – showing his grit, determination and perseverance to succeed as the Most Improved Student. Shimon, an outstanding pianist, also performed at the end of the ceremony.

The Contribution to School Prize was awarded to Kimberly Shanika Olanma Nweze, from Nigeria, who devoted equal endeavour to both her academic studies and extra-curricular participation. Her effusive and passionate character energised the boarding house and classrooms, and she ended the ceremony by giving a wonderful speech on how she had grown and developed as a person over the past 10 months.

Academic Director of King’s Ely International, Matthew Norbury, said: “In a world where personal, professional and political change challenges individuals and global leaders equally, King’s Ely is proud to be supporting a generation of global citizens fit to face such unpredictable times. We are proud of our heritage as a school and our future as a beacon of internationalism, cooperation and mutual respect.”

The ceremony was followed by a buffet reception in the Old Palace where many students bid joyful farewells to classmates, teachers and staff. From the cohort of 37, King’s Ely is proud to be welcoming back 21 of this international community for the start of their A Level programme in September 2019.

To find out more about international programmes and other opportunities at King’s Ely, please visit www.kingsely.org