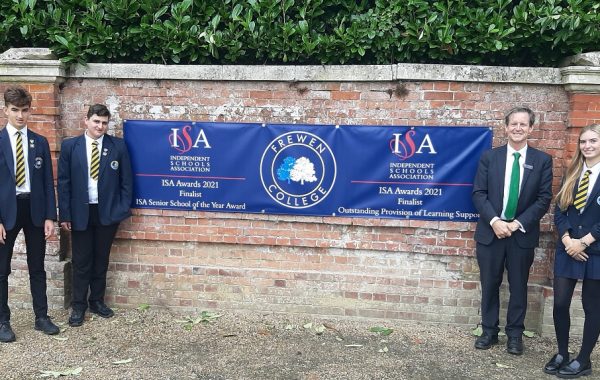 Frewen College, a leading dyslexia school for girls and boys aged 7-19, based locally in Northiam, near Rye has become a finalist in the Independent School Association (ISA) Awards 2021. The School is a finalist in two categories ISA Award for Outstanding Provision for Learning Support; and, ISA Senior School of the Year Award.

Founded in 1878, the Independent Schools Association is one of the oldest of the independent schools’ organisations. The ISA Awards take place annually and recognise the breadth of quality and provision in independent education across the country.

Mr Goodman, Principal of Frewen College, said: “We are delighted to be in the top 3 national finalists for two categories, and to have our work with dyslexic students recognised. The ISA Senior School of the Year Award is for all Senior Schools, not just special schools, and is based on student progress. Of course, at Frewen, students typically join us several years behind where they should be, then catch up, and then often exceed expectations – which means their progress is exceptional.” Mr Goodman continued: “It is a testimony to all the hard work that goes on, day after day, to ensure that our students, all of whom are dyslexic, can make progress and achieve success.”

Frewen welcomes dyslexic students of all abilities.  In 2021 the school celebrated the 7th consecutive year of record exam results. ‘Pupil progress’ and ‘achievement’ have continued to increase year-on-year over the last seven years.

Although Frewen is an independent school with privately funded students, a proportion of Frewen’s students are also funded by Local Authorities through an Education Health & Care Plan (EHCP).

Frewen College’s roots go back over 100 years making it one of the oldest dyslexia schools in the country. If you would like to know more about Frewen College, you can come along to one of their Virtual Open Mornings on 11th and 12th October. www.frewencollege.co.uk

Frewen College is a unique school for young people between the ages of 7 and 19, with Specific Learning Difficulties (SpLD) such as dyslexia, dyspraxia and dyscalculia, and Speech, Language and Communication needs.

Frewen College’s roots go back over 100 years, It is regarded as the oldest specialist school for dyslexic students in the UK, and quite possibly the world. First established in Rottingdean in 1910 by Seabourne Godfrey Arthur May Moens and called Down House, and then later moved to Northiam, near Rye, and called Brickwall School.

Frewen College is based at Brickwall House in Northiam, East Sussex in an idyllic setting of many acres of grounds.   Brickwall is a 17th century country house and estate and was home to the Frewen family for over 300 years. In 1969 Admiral Sir John Frewen gave Brickwall House and grounds to the school as a gift.