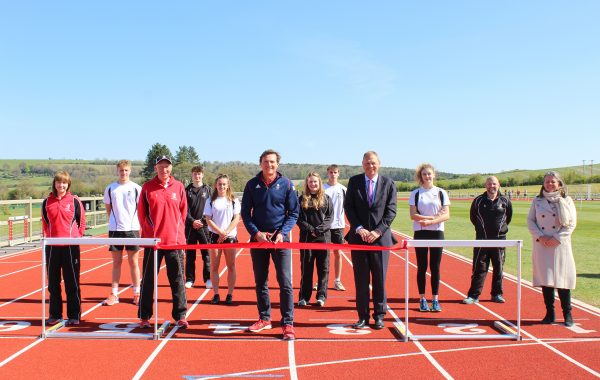 Half a century ago, Dauntsey’s Sailing Club was founded. The years since have been a story of revolution, renovation, tragedy and triumph – and lots of adventure, as Head of Sailing Toby Marris explains.

Back in 1970, the Head of Maths, Bill Parish, taught landlocked Dauntsey’s pupils about navigation at sea in order to demonstrate one practical application of his subject. Some of them wanted to turn theory into reality.

Over the next six years, Bill and other teachers took pupils to Griffin II’s moorings, where they scrubbed off barnacles, purged bilges, sanded, painted, varnished – and sailed.

Over those years, the Sailing Club became increasingly popular and the relationship with Commander Hoare changed, with Dauntsey’s assuming ownership as well as the cost of insuring the boat.

In 1976, Griffin II was brought to Dauntsey’s on the back of a lorry for a full refit, carried out mainly by pupils. Then tragedy struck: Griffin, back at berth in Portland harbour that October, was destroyed in an autumn storm.

Two people filled the sailing void for a year. Lord Methuen, who had no connection with the School, not only raised £1,200 towards a new boat but also lent us his yacht, Sakr El Bahr IV, for racing and reviews, and OD Richard Hargreaves allowed us to use his Spinning Jenny many times. Together, they kept us going.

As that year turned, Exeter Maritime Museum was in negotiation to buy Jolie Brise at a favourable price. Jolie Brise was built in 1913 as a Le Havre pilot cutter which involved racing pilots to incoming ships so they could be paid for bringing them into harbour.

The Frist World War kept her form her job and eventually she fetched up as a fishing boat in Concarneau, on the French side of the Bay of Biscay. Enter Evelyn George Martin, who had sailed there and was looking for a racing boat. Jolie Brise was it. Martin brought her back to Britain and went on to co-found the Fastnet Racefrom the Isle of Wight back to the Solent via the Fastnet Rock. Jolie Brise won the first race and three of the next six – and a legend was born.

After the Second World War, she was bought by a syndicate led by

Luis Lobato, who sailed her from Lisbon back to England to escape the Portuguese revolution in 1974. He had used her as a youth training ship for the better part of 30 years and wanted her to continue in the role.

Dauntsey’s School, working together with Exeter Maritime Museum, and using the insurance money from the loss of Griffin II’, acquired Jolie Brise. A deal was put together whereby the Museum owned the boat, but Dauntsey’s had the use of it on a 25-year lease.

For the next few years, in winter months, Club members travelled to Exeter to work on the boat at weekends, many teachers were involved and there were lots of fun and exciting voyages. In one, the now world famous yachting journalist and maritime historian, Tom Cunliffe, was asked to take £2,000 in cash and a pupil crew to sail to Spain to buy Rioja to sell to Dauntsey’s parents at a profit. The saloon was packed with 200 cases. When they got home, they all sold.

“Jolie Brise changed my life,” says Tom. “A year after I skippered her I sold up and bought a cutter and sailed away to a new life. It all started with Jolie Brise, as it has for so many others. There is nothing quite like her”.

At that point, all seemed both exhilarating and immensely enjoyable, but a bit amateurish. That changed in 1995, when an accident involving another training ship led to the codification of all aspects of running a training ship. From then on, Jolie Brise had to be run commercially and in line with strict international regulations as, under UK maritime law, she effectively became a commercially operated merchant vessel.

That’s where I came in. Shortly afterwards, the museum went bust, a barrister bought the assets and we bought out the lease from him. Dauntsey’s has owned Jolie Brise outright ever since.

Setting course for the future

While the Sailing Club was popular, it was still quite small in terms of pupil numbers. One of my first tasks was to increase its appeal.

When I arrived at the school, I found a lot of the pupils didn’t even know we had a boat. So, we decided that every pupil should come on board Jolie Brise to find out about sailing and then be able to decide whether they wanted to continue sailing or not.

From then on, each September, every member of the Fourth Form spends 24 hours on Jolie Brise, gets to cook a meal, spend the night and go sailing the next day. Then they can take an informed decision: do they want to continue or not? We offer pupils who join Dauntsey’s in the Lower Sixth the same opportunity.

The upshot is that we’ve gone from around 30 pupils in the Sailing Club to 230 regulars – this equates to half the senior school and is made up of almost exactly 50:50 girls and boys.

We estimate about 10,000 young people have been sailing with the Club over the last 50 years (mainly from Dauntsey’s but others have joined through outreach activities such as our connection with the Ellen McArthur Cancer Trust).  Together we have almost covered the distance to the Moon and back.

Jolie Brise is lifted out of the water every year for a full inspection, anti-foul and re-fit. We try and improve her conditions each year through a pro-active maintenance programme.

The spirit of adventure

The Dauntsey’s spirit of adventure is embodied in Jolie Brise . Any school that sends a 100-year-old boat racing across the North Atlantic, crewed by its pupils is adventurous by definition.

We’ve been to North America and back no less than six times, sailed hundreds of miles inside the Arctic Circle, braved the Bay of Biscay multiple times and won many races – including the famous Tall Ships Raceno less than four times.

We’ve even been able to keep going in this last year, taking pupils out sailing for day trips. The stipulations were that all pupils were in one onshore bubble and the professional crew in another.

Our hope is that all who sail in her will have the same wonderful experiences as their predecessors and will go on to become the next generation of Sailing Club mainstays.

The Sailing Club is 50 and there is no reason why the Jolie Brise shouldn’t be with us in another 50 years, with decades of further adventures behind and in front of her.